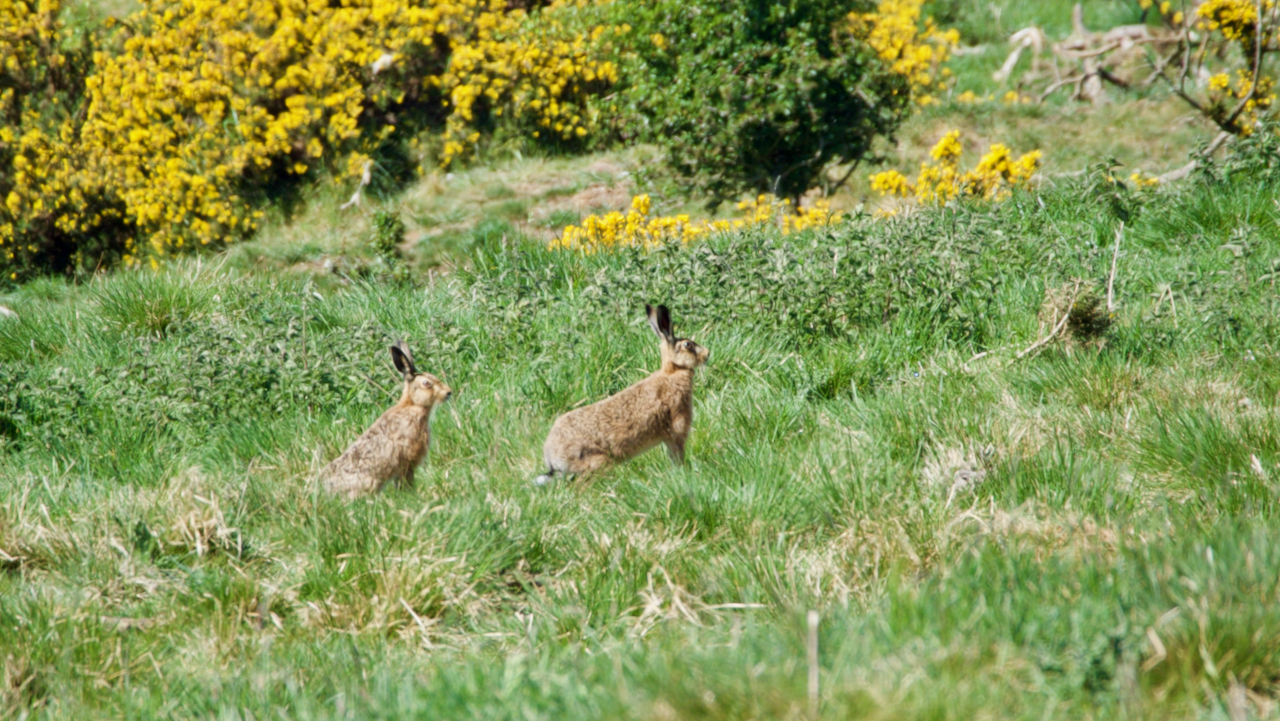 Can you say a brace of hares?

What is the collective noun for a group of hares? So many to choose from: a band, a down, a drove, a flick, a herd, a husk.

I don’t like herd, but do two count as a group anyway?

I haven’t the patience for nature photography so when an opportunity comes along it’s quite rewarding. Sight of these two brown hares reminded me of the local folklore of witch-hares. It was believed that witches could transform themselves into their familiars, popularly thought of as just cats and dogs but on the Moors, hares were also associated with witches. In the form of a hare, a witch could quickly cross the moors. This belief persisted right into the early years of the 20th-century.

Jane Grear was a witch from Guisborough. Once, when she had the form of a hare, she was badly bitten by a dog. She was discovered panting heavily, bearing a bite wound in her leg.

In Westerdale, Awd Mally had a reputation of being a witch. A farmer suspected her of stealing milk and so he laid in wait his gun loaded with a silver bullet cast from old buttons. But Awd Mally spotted him as he lay in wait and immediately attacked him with eyes as big as saucers. The farmer was so terrified that he threw down his gun and ran home to escape her.

A bullet cast from silver is supposed to be one of the few things that could kill a witch although the Witchcraft Act of 1604 prescribed death by hanging.

Many times though the witch would come off worse. One hare was shot in Goathland with the usual silver bullet. She escaped but the next day Nanny Pearson was seen to have corresponding injuries. Perhaps evidence that the silver bullet doesn’t actually work.

The local lads in Danby would flush out hares out with hounds. Nan Hardwicke lived nearby and, in her hare shape, she would squat quietly among the heather until the hounds flushed her out. But she could never be caught, she was always fast enough and clever enough to outwit them.
[Ref012]
 Open Space Web-Map builder Code