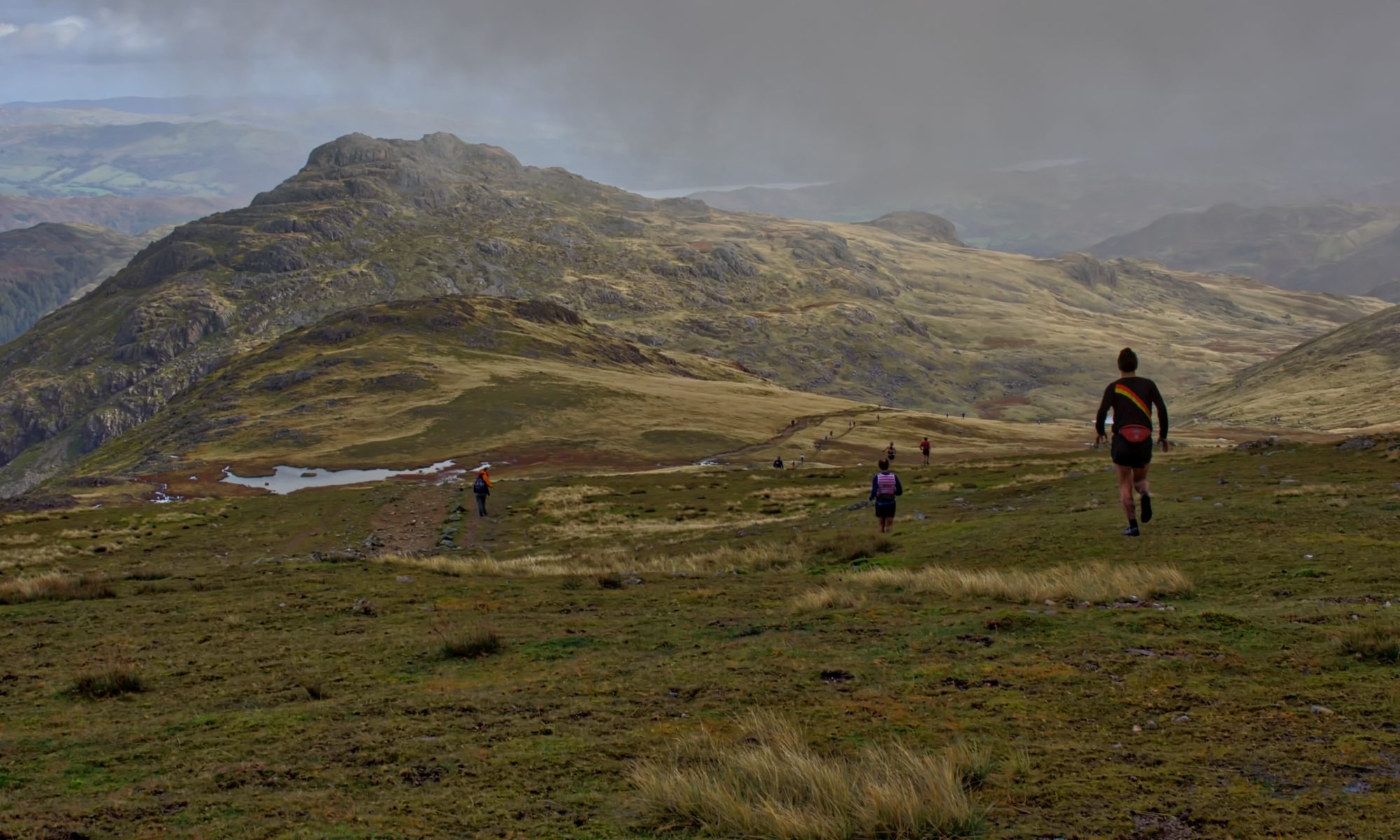 Descending out of the mist and heading for Pike o’ Blisco, the 2,313′ fell in the distance behind the smaller knoll of Great Knott.

The runners are competing in the 2008 Langdale Horseshoe Fell Race, one of the classic races. First inaugurated in 1973 and just over 13 miles in length with over 4,700 feet of climb. It starts from outside the Old Dungeon Ghyll and ascends Stickle Gill to Stickle Tarn, then visiting checkpoints at Thunacar Knott, Esk Hause shelter, Bowfell, Crinkle Crags, Pike o’ Blisco, Blake End Rigg before finishing in a field near the ODG. The inaugural race was run by Joss Naylor won in 2 hours 8 minutes.

I wasn’t doing the race in 2008, but I did do it several times in the 1970s/80s. I probably did it in 1977 when Andy Styan won, lowering the record to 1 hour 55 minutes and 3 seconds. I still remember him at the prizegiving puffing away on a cigarette. Amazingly Andy’s record still stands, 43 years later. The routes between checkpoints were a bit of a free for all in those days but are now well established trods. Nevertheless, as with all Lakeland fell races, the navigation can get technical in the clag.

The ladies’ record is also long-standing, set by Helene Diamantides in 1992 – 2 hours 23 minutes and 25 seconds. Why these records have stood for so long is a bit of a mystery. The well-worn trods across the fellsides would logically have made the going faster but many of the final climbs up to the summits have become rockier and loose. Furthermore, I am not convinced the stone-flagged steps to Stickle Tarn and up Esk Hause make the running any easier.

The descent off Cringle Crags involves negotiating ‘The Bad Step’, a 10-foot drop which Wainwright describes as “the most difficult obstacle met on any of the regular walkers’ paths in Lakeland.” It is easy enough to avoid by keeping left but many runners, either forget, leave it too late, or are confident enough in their mountain goat abilities and end up climbing down it.

It’s very satisfying when I discover some new piece of history. In researching this post I found out that in the late 19th-century there was a series of pits and trial borings made for iron ore in the col below Pike o’ Blisco near Red Tarn. Some ore was extracted over a 15 year period but the Red Crag Mine was not commercially successful. Something to look out for on my next visit once this lockdown is over.
 Open Space Web-Map builder Code