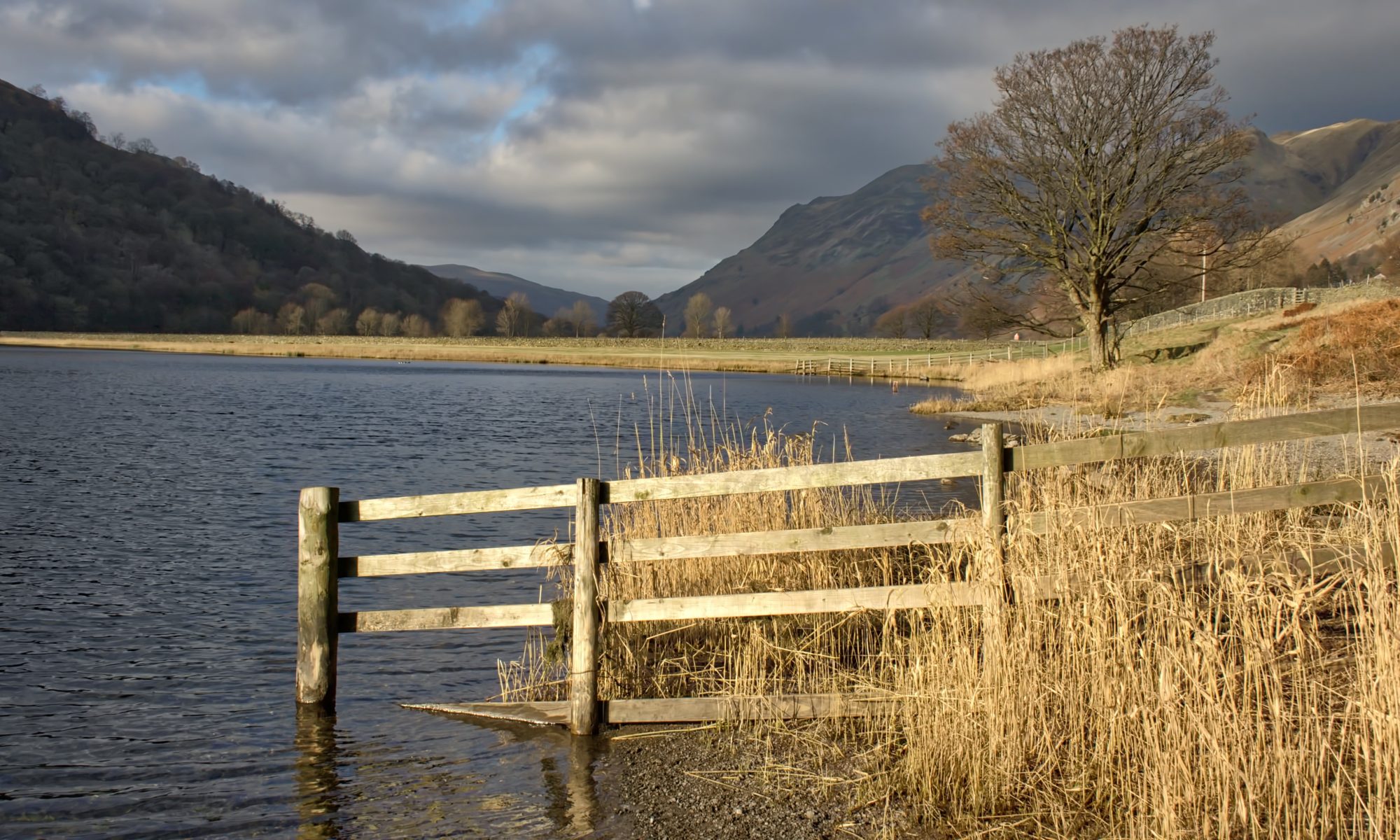 Originally called Broad Water (and before that Broader Water) it is generally accepted that Brotherswater was renamed after two brothers were unfortunately drowned in there on New Year’s Day around 1812 whilst skating on the frozen lake. Apparently underground springs flowing up from the lake bed caused patches of thin ice. I found this information in John Wilson Parker’s superb “An Atlas of the English Lakes” (Cicerone Press 2002).

But according to “A Literary Guide to the Lake District” by Grevel Lindop (Chatto & Windus 1993) Dorothy Wordsworth recorded “the ‘remarkable’ coincidence that another pair of brothers had been drowned in about 1785 on a New Year’s Day:

Their mother had set them to thresh some corn, and they (probably thinking it hard to be so tasked when all others were keeping holiday) stole out to slide upon the ice, and were both drowned. A neighbour who had seen them fall through the ice, though not near enough to be certain, guessed who they were and went to the mother to inquire after her sons. She replied that ‘they were threshing in the barn’. ‘Nay’, said the man, ‘they are not there, nor is it likely today.’ The woman then went to the barn and the boys were gone. He was then convinced of the truth, and told her that they were drowned. It is said that they were found locked in each other’s arms.”

Lindop gives no date when Dorothy, who died in 1855, actually wrote this but it does suggest that she was aware of an 1812 drowning and was referring to a much earlier happening. But one question I have is why would they be threshing corn on a winter’s day?

However, recently a local historian, writing as Lakeland Tales Blog, has carried out a lot of research into the drownings. He says that this coincidence of two pairs of brothers drowning in the lake was noted by Harriet Martineau in her 1855 book “A Complete Guide to the English Lakes” who wrote:

“Brothers’ Water derives its name from the accident – which is said to have happened twice,- of brothers being lost in it, in the attempt of one to save the other. On one of the two occasions, the accident happened through the breaking of the ice, when the brothers were making a venturesome short cut across it to church.”

He goes on to refer to a manuscript diary of 1789:

“We soon passed a small lake, a feeder of Ullswater, called the Brothers, from two brothers having been drowned in it.”

And a further article from the 1850s which gives a name to the brothers as ‘Atkinson’ and records death as a result of falling through the ice in a frost, although no date was mentioned.

Armed with this information, Lakeland Tales Blog searched the registers of Patterdale Church and found the burials of John and George Atkinson on 5th January 1786 “having been involved in a tragedy where both drowned and they resided at Low Hartsop”. The baptism records point to the brothers being aged 27 and 19 when they died. No reason for the drowning is given but an uncorroborated account states that “they were taking a short-cut to the church across the ice on the lake”.

Lakeland Tales Blog goes on to refer to a contemporary newspaper article dated 25 January 1786, although there are some discrepancies as it gives the name of the brothers as Watson and not Atkinson and gives their ages as 19 and 16. These are assumed to be basic transcribing errors.

The brothers were the sons of a yeoman and had crossed the frozen lake in the early morning to visit a friend’s house. They returned in the evening by re-crossing the lake. Their father, working in the fields, saw them crossing and realised the danger. He tried to get their attention but they did not see him and once in the centre of the lake, the ice gave way. Their bodies were recovered the next day. Significantly the article uses the term Brother Water and goes on to conclude:

“It is said Brother Water is so called from a fatal accident of the same kind which happened some centuries ago.”

So this pretty much confirms that Dorothy was right with her ‘remarkable’ coincidence although wrong about the date. There have indeed been two pairs of brothers drowned in Brotherswater which name must have been changed from Broad Water centuries before 1785 in order to commemorate the first as yet un-named pair who tragically drowned. More research is needed to discover their names.

However, it should be noted that, for once, Wikipedia is not omniscient.
 Open Space Web-Map builder Code