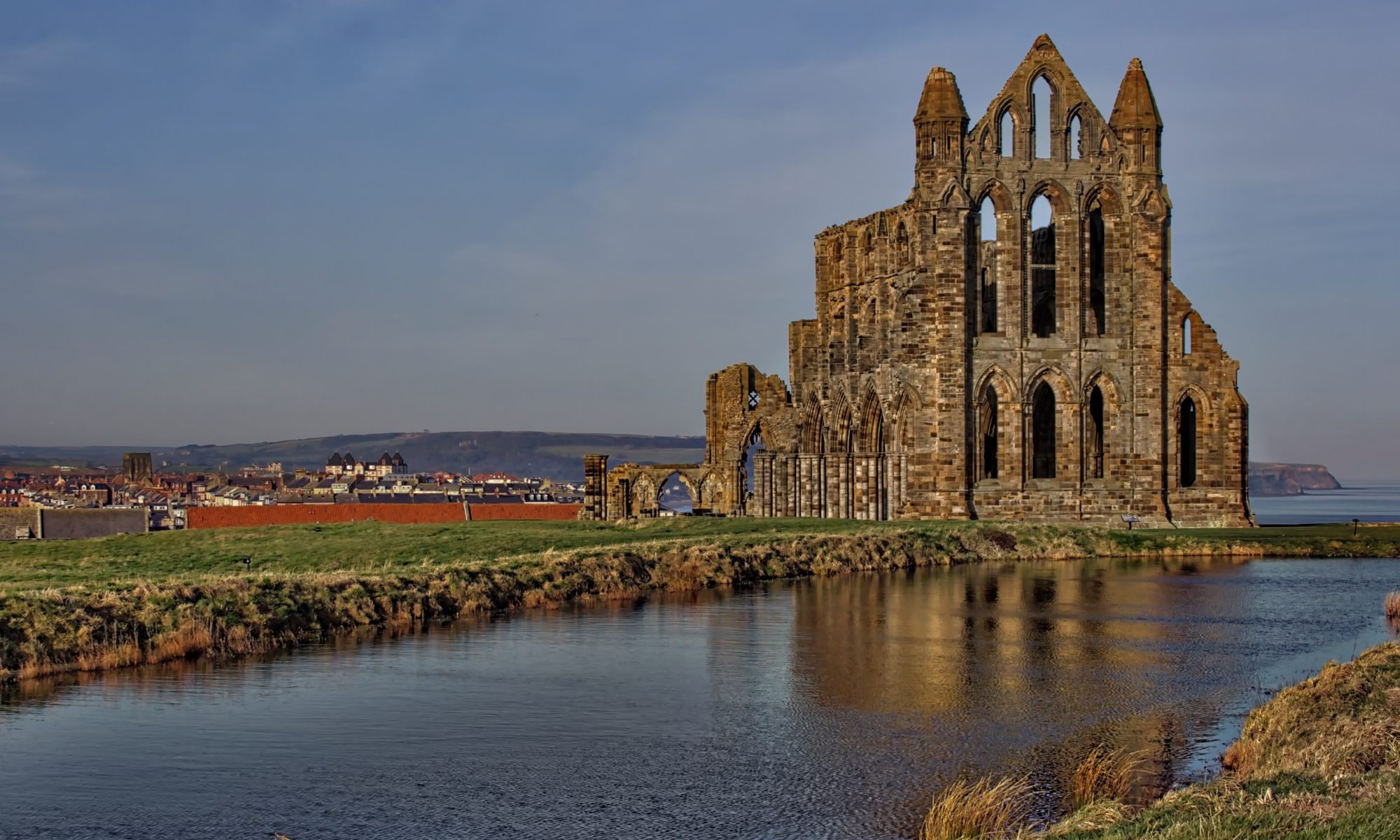 I’ve been two days now in a virtual Scotland. Long enough, time to head south. This is the classic view of Whitby Abbey, founded by St. Hilda in the 7th-century. Of course, she wasn’t a saint when she first stood on this cliff overlooking the small settlement of Streanæshealh at the mouth of the Esk and these ruins are not of her actual abbey. That was destroyed by Danish invaders in 867. These ruins are of the Benedictine abbey that was built after the Norman conquest and later dissolved by Henry VIII.

I don’t exactly know why Hilda was venerated. Maybe it was because when she came here the place was crawling with snakes. Hilda was terrified and prayed that all the snakes would crawl over the cliff and be petrified into stone, which, of course, they promptly did and can now be found on the beach in the form of “snake stones”. These were much sort-after as lucky charms and believed to cure cramp. But snake stones have no heads I hear you argue, yes but they lost them in their fall down the cliff. Some enterprising locals even obliged by carving these missing heads on the snake stones. Their work can be seen in many museums up and down the country.  You will have realised that these “snake stones” are actually ammonites, the fossilised remains of Jurassic marine mollusks. Today three of them can be seen on the coat of arms for Whitby town .

Another local legend put forward by the 16th-century historian William Camden is that seabirds flying over the abbey sweep low in her honour. One later variation on this is that sea-birds drop down dead if they cross the abbey. This is supposedly because of a curse laid upon them by Hilda but I can find no explanation why there should be such two conflicting legends. Maybe just a blending with the story of the petrified snakes.

As we approach Easter it is worth mentioning that Hilda is best known for hosting the important Synod of Whitby where it was decided that the English church should follow Roman rather than the Irish calculation when Easter should be celebrated. Nowadays, this might seem a rather arcane theological debate but at the time confusion reigned. The Venerable Bede wrote “Such was the confusion in those days that Easter was some-times kept twice in one year. So that when the king had ended Lent and was keeping Easter, the queen and her attendants were still fasting and keeping Palm Sunday“. This meant that King Oswiu of Northumbria, who followed the Celtic tradition, was denied his marital rights from his Queen who followed the Roman. King Oswiu duly declared that the English church would follow the Roman way, ensuring domestic bliss. The Celtic monks did not accept this and eventually withdrew to Ireland.
 Open Space Web-Map builder Code