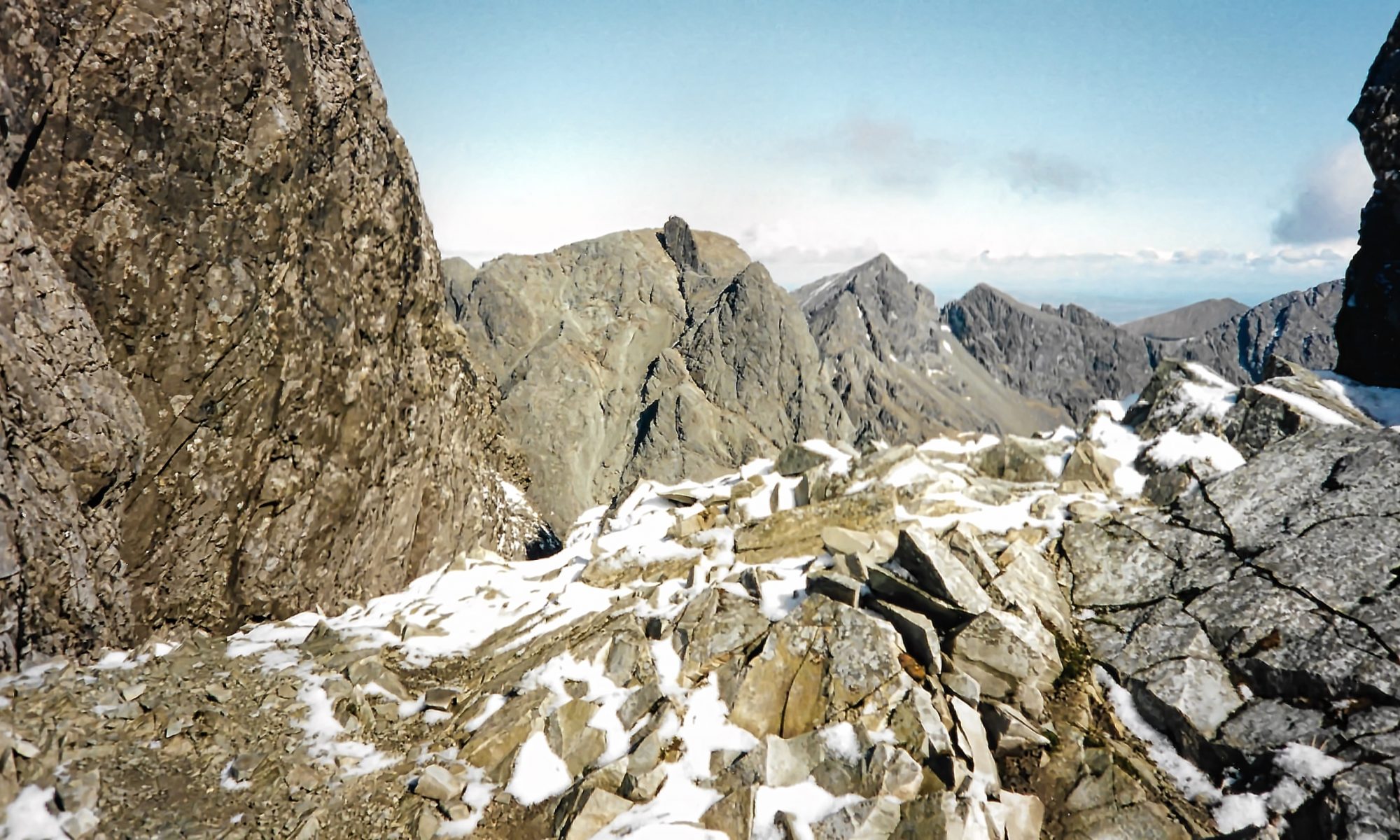 The Black Cuillin Ridge is one of the classic mountain ridges in the United Kingdom, some say the only true mountain ridge. 14 km of rough igneous rocks, gabbro and basalt, with 11 Munros many requiring rocking climbs and abseiling. This image and the one below are scans of proper photographs taken on a traverse of the ridge with 3 mates, Rob, Barry and Andy. Andy was the leader, a forthright Yorkshireman and a proper climber with 274 Munros under his belt, 3 to go and all on this ridge (although he hadn’t let on at the time). We set out in the dark, we finished in the dark, with snow on the first hill, and snow on the last, and in between, a gloriously sunny day. A grand day out.

The main photo is a remote view of the middle section from near Sgurr Alasdair. Now, I mentioned earlier that there are 11 Munros on the ridge, a Munro being a Scottish mountain over 3,000 feet or 914.4 m in height. One such Munro is that small flake in the centre of the photo. The Inaccessible Pinnacle, 986 metres high above mean sea level. Actually higher than the summit behind it. From this angle quite deceptive. The ascent involves a ‘Moderate rock climb’ and abbing off the other end. We arrived at lunchtime to find a queue waiting, all roped up. Our leader in true Yorkshire style persuaded them to allow us to overtake as we were climbing free of ropes. Job done, another Munro bagged.

Now the smallest Munro on the Cuillin Ridge is Sgurr a’ Mhadaidh which at 918m above mean sea level is 3.6 metres above the qualifying height. With rising sea levels, therefore, Sgurr a’ Mhadaidh will be the first to undergo downgrading to a mere Corbett.

Mean sea level is the halfway mark between high and low tides, established a century ago by the Ordnance Survey and used to measure the absolute height of British hills and mountains. It is measured by a gauge at Newlyn in Cornwall, but since then sea levels have risen and are continuing to rise at an alarming rate, mainly through climate change.

Between 1900 and 2016, mean sea levels have risen by 16–21 cm but more precise data using satellite radar technology have suggested an acceleration in the rise of 7.5 cm from 1993 to 2017, which is a trend of roughly 30 cm per century and evidence suggests this acceleration is increasing.

The question is when will the Ordnance Survey rectify this anomaly and recalculate the datum point. Perhaps pre-empting future changes on a decadal basis would seem the most sensible, clearly however, if this fixed datum point rises then the heights of all British hills and mountains will lower.

The Munro most at risk of demotion is Beinn Teallach, to the north of Loch Laggan. At 914.6m asl it has just 20 cm of breathing space.
 Open Space Web-Map builder Code

2 Replies to “The Cuillin Ridge”