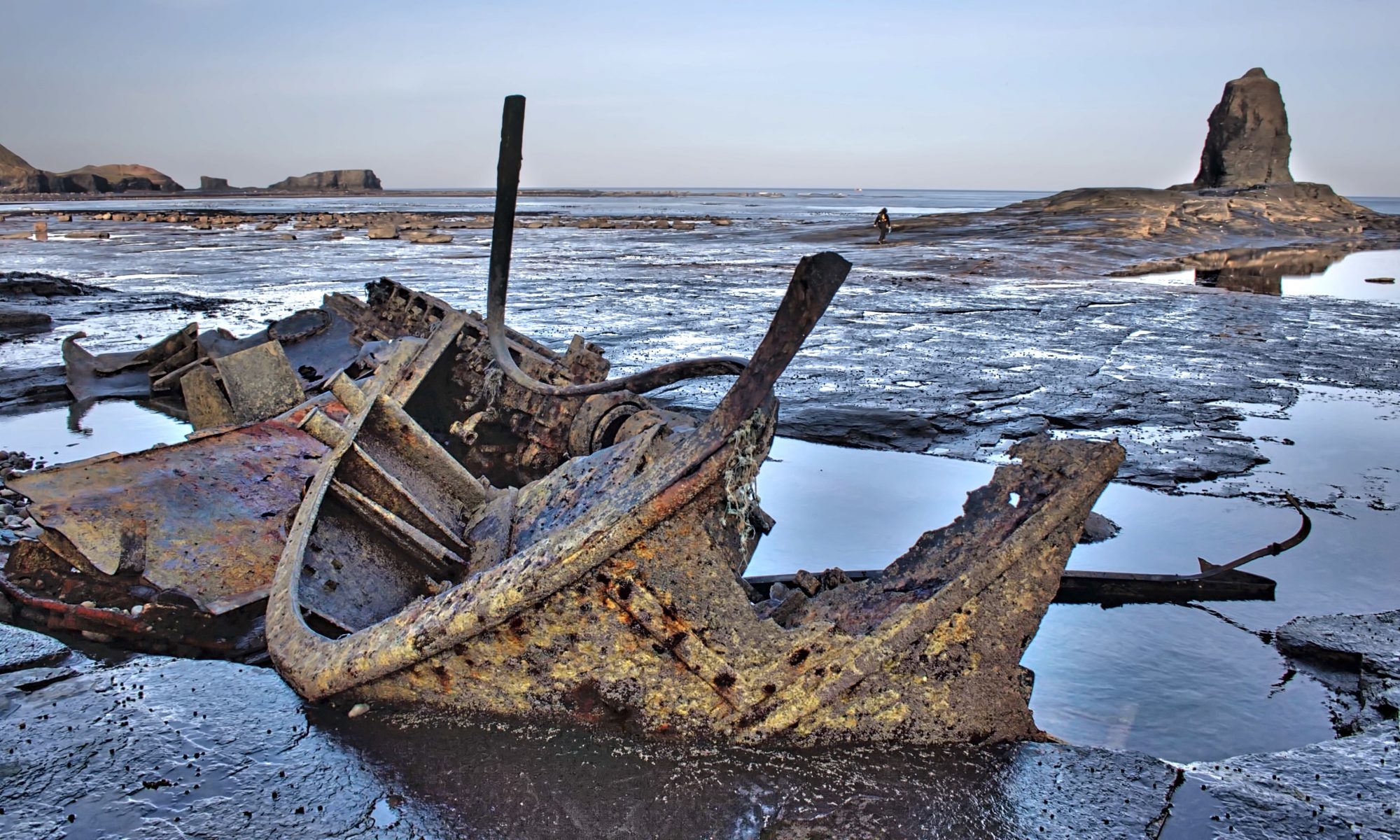 When I took this photo in February 2008 I was not convinced that this was indeed the wreck of the Scarborough trawler, the Admiral Von Tromp. The Yorkshire coast is notorious for shipwrecks, there have been so many that identification can prove difficult. However, there are now plenty of photos on the internet saying that this is indeed the Admiral Von Tromp so I assume it must be.

Technically, Saltwick Bay lies about a mile east of Whitby although in my mind I always think of it as south. It is north-east facing and was once a hive of activity relating to the alum industry. The bay is dominated by Black Nab, a forbidding sea stack that becomes an island at high tide.

The Admiral Von Tromp had set out from Scarborough Harbour for the fishing grounds of Barnacle Bank fishing grounds at one o’clock in the morning of the 30th of October 1976, a distance of about 45 miles.

Once clear of the harbour, Taal set a course NNE for the fishing grounds and assigned Addison to the wheel. He had a cup of coffee, checked on Addison again and retired to his bunk. Everything seemed normal. The weather was foggy but that shouldn’t have been a problem as they were heading away from the coast into the North Sea.

Taal was suddenly awakened by a scraping and a heeling of the boat. Rushing to the wheelhouse he shouted at Addison “What the hell are you doing!” who looked back in stunned silence. Incredulously it dawned on Taal that the boat had grounded somewhere off the rugged coast. Later it would emerge at the inquest that it was heading due west, 90º off course and straight for land. A nautical surveyor testified that if the boat had been left to its devices, it would not have gone onto the rocks concluding that it was driven onto the rocks by a deliberate act.

Taal ordered the crew to don their lifejackets and sent out a mayday call. He then tried to anchor the boat but that turned it broadside in the heavy sea and it started to fill with water. Addison was still looking stunned. By now the boat was heeling over, and the crew took shelter in the wheelhouse in which they soon became trapped. After an hour, with water up to the ceiling, they managed to escape but unbeknown to the crew Addison had already drowned, his body washing up several days later in Runswick Bay.

The Whitby Lifeboat quickly responded and tried several times to get close hampered by heavy seas and fog. The Coxswain, Robert Allen, managed to speak to Taal, who said that everyone was alive. The Coastguard even managed to throw a rocket line but by this time the crew was trapped inside the wheelhouse.

Once outside the wheelhouse, an enormous wave swept George Eves overboard. It was the last they saw of him. Taal too was washed overboard but was eventually saved by the Inshore Lifeboat. Marston and Nicholson managed to reach the shore.

The pathology report found no signs of alcohol in Addison. Marston testified that in the wheelhouse Addison seemed stunned and unable to act just saying ‘Oh Alan!’ in a quiet apologetic voice. So it remains a mystery exactly what caused the Admiral Von Tromp to run aground at Black Nab in Saltwick Bay.

The Coxswain of the Whitby Lifeboat, Robert Allen, was awarded a Silver Medal and the Helmsman of the Inshore Lifeboat, Richard Robinson a Bronze Medal for their role in the rescue.
 Open Space Web-Map builder Code