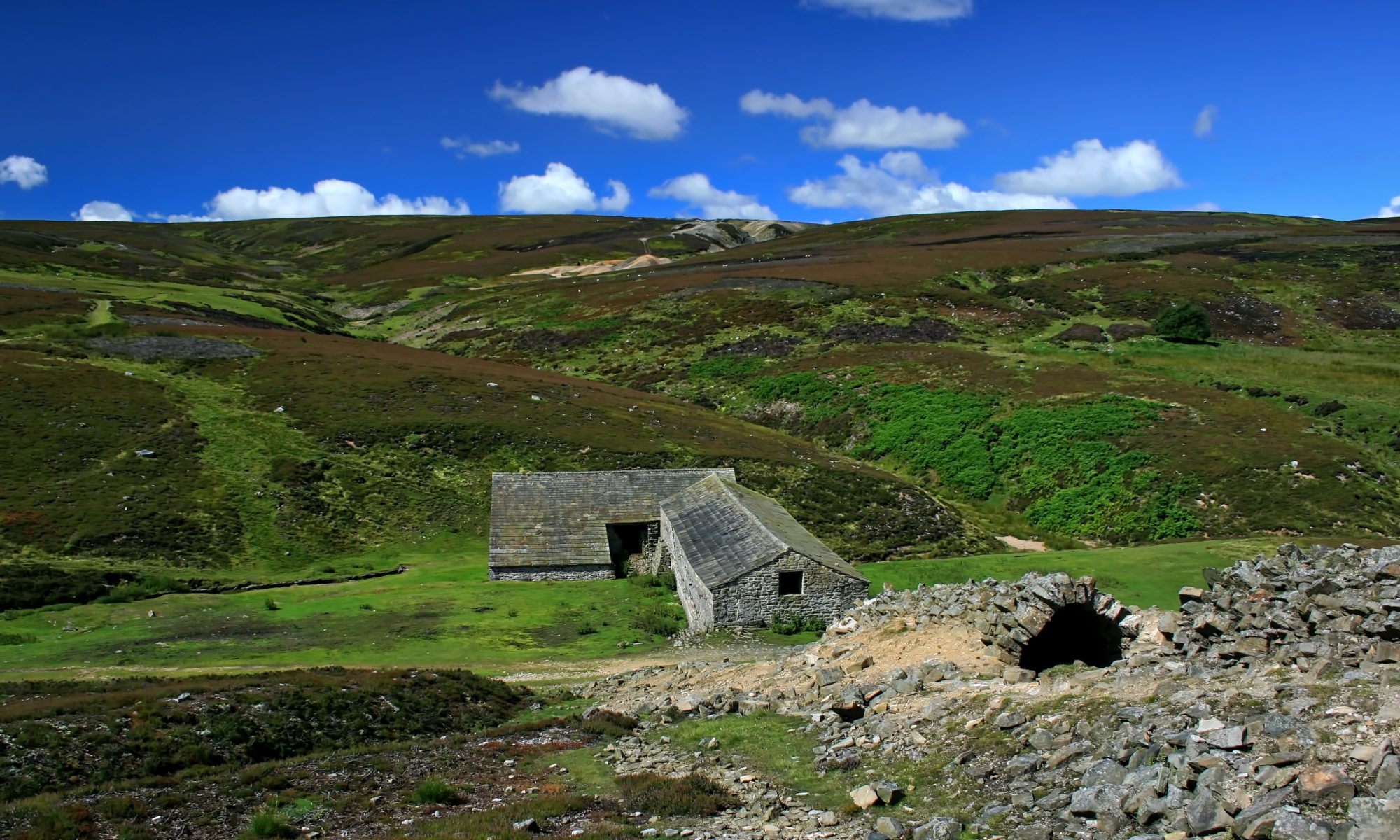 Arguably the best-preserved and most visited lead ore smelting mill in the Yorkshire Dales. Located by Cogden Beck, south of Grinton village, it probably dates from about 1820 and was saved from becoming a derelict ruin by being reused as an agricultural barn soon after smelting ceased. The two ranges remaining are the mill itself furthest in the photo and the peat store nearest. In the foreground are the remains of the flue up Sharrow hill to vent off the poisonous lead fumes.

Lead has been mined in Swaledale certainly since Roman times. An ingot, or ‘pig‘, found near Hurst bears the name of the Roman emperor Hadrian. It is thought the Romans used enslaved native Brigantians. Lead has been found in jewellery in pre-Roman burials and must have been mined somewhere probably using bell pits.

But by the 17th-century these small scale operations expanded when landowners took a more active role in the lead-mining industry. Instead of just taking royalties, in partnership with big London companies, they were able to supply the capital the miners lacked allowing for more ambitious schemes. By the 18th-century Britain was the largest producer of lead in the world.

Lead veins are faults in the rock strata into which mineralised solutions containing lead were forced from deep in the earth’s crust to crystallise as galena or lead ore. They are usually vertical bands in the rock, unlike coal seams which formed horizontally. Lead miners were paid fixed prices for the weight of lead ore they extracted, which, when working a thin vein, reduced their wages substantially. In the goodness of their hearts, mine owners would allow their miners to borrow money when veins were thin which, of course, had to be paid back when mining thicker veins.

Lead mines consisted of a tunnel, known as a level, dug out of a steep hillside. Ponies hauled wooden tubs full of ore out along wooden rails although these were eventually replaced with more efficient iron rails. Hushing was another method of extraction, usually early in the process to locate a vein. A temporary dam was constructed in a steep-sided valley behind which a large body of water would accumulate. The dam breached suddenly to remove the topsoil revealing the rock and any lead veins. These channels, known as ‘hushes’ can still be seen today on the hillsides of previous lead-mining areas as barren hillsides on which very little can grow.

The extracted lead ore had to be crushed and washed repeatedly to separate the heavier, valuable lead from the lighter surrounding rock. Once separated, it was smelted with coal at a water-powered smelt mill such as Grinton. The  coal would have been obtained from local, upland pits rather than hauling it from the deeper pits over in County Durham. Trains of up to thirty packhorse ponies, or ‘jaggers‘ were used to transport the smelted lead ore down from the smelting mills along moorland tracks to ports such as Yarm on the Tees.

Child labour was a key element in lead mining activities. Near the mine entrance, they could be seen on the washing floor, using a mell, or large hammer, to crush the lead ore to about the size of a pea. These ‘little slaves’ came to the ‘foot to knock, knock, knock’. The ore was then washed and the gangue or waste material was dumped. The galena was then taken to the smelt mill some distance away. The children would have to walk quite a distance to the mine early Monday morning and would stay there from then until the Friday evening, hence their mothers put food in their ‘wallets’ or packs to sustain them for the 5 days.

The quotes in the last paragraph come from the song “Fourpence a day” by Ewan MacColl that tells of the life of a child labourer working in the lead mining industry. It is said he collected it from John Gowland, a retired lead miner of Middleton-in-Teesdale, Co. Durham. It is available on YouTube and well worth listening to whilst reading the words.

Ore’s a-waiting in the tubs, snow’s upon t’fell,
Canny folks they’re sleeping yet but lead is reet to sell,
Come, me little washer lad, come, let’s away,
We’re bound down to slavery for fourpence a day.

It’s early in the morning we rise at five o’clock,
Little slaves come to the foot to knock, knock, knock.
Come, me little washer lad, come, let’s away,
It’s very hard to work for fourpence a day.

Me father were a miner, he lived down in t’ town,
’Twere hard work and poverty it always kept him down;
He aimed for me to go to school, but brass he couldn’t pay,
So I had to go washing rake for fourpence a day.

Me mother rises out of bed with tears upon her cheek,
Puts me wallet on me shoulders, it has to last a week,
It often fills her great big heart when she to me does say,
I nivvor thought thaa’d ‘av te work for fourpence a day.

And fourpence a day lad, the work is very hard,
Never a pleasant nod from a gruffy looking sod,
His conscience it may fail aye his heart it may gi’e way,
Then he’ll raise us wages to ninepence a day.